Be Kind To Strangers 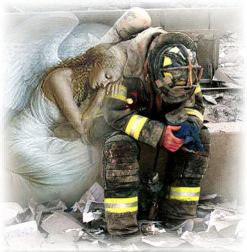 It was a day like any other at the Cracker Barrel restaurant in Titusville, Florida. But it would prove to be a very special one for a particular waitress named Amy.
The staff was very busy this day, rushing to get everyone seated and taking all their orders. Amidst this activity a man walked in, who took the hostess by surprise. He was dirty, wore ragged clothes and smelled very bad. And to top it off, this bum couldn't even speak English! She wanted to ask him to leave, but it just wasn't the restaurant's policy to do so.
As he waited to be seated, a few of the wait staff came up to seat others and when they drew near to him, they couldn't help but notice. They all told the hostess the same thing: don't seat him in my section! Out of desperation, the hostess asked Amy if she would wait on him.
"Of course, I will!" she responded. "You bring him to my station."
Amy was quite upset that no one else wanted to take care of this man, but she tried not to let it show. She hated judgemental attitudes worse than thieves. Within minutes, Amy came out of the kitchen with an order and told the man, "I'll be right there, sir." By this point, everyone in the restaurant was staring at him, which really confused her.
When she finally went to take his order, she asked if he'd like some coffee. He said, "No thank you, but tea?" Amy replied, "Sure," and went to get it for him. (Now remember here that this man spoke no English, but Amy understood him perfectly well.) She brought him the tea and smiled.
"Do you know what you want to order?" she asked.
"Yes," he replied and Amy made note of it.
When she returned to the kitchen to submit his order, the other wait staff just stared at her with
"How can you stand it?" they asked.
"Stand what?"
"The man is dirty, smelly and cannot even speak English. How did you know what he ordered? Do you speak his language or something?"
Amy just looked at them puzzled by their questions. She got the man's order and returned to his table.
"So, where are you from?" she asked.
"Long way from here."
"Have you been travelling long?"
"Yes."
"Well, I hope you like it here and come back to visit me."
"I would love that."
Then Amy went about her business. During that time, the man finished his meal and left, much to the relief of the other staff and some of the customers as well. Later, one of the girls asked Amy how she was able to serve the man.
"Why? What do you mean?" she asked.
"That man - he was so.... so.... dirty!"
By this time, Amy had had more than enough. Drawing a few of the staff members aside, she said: "Look, I don't know what your problem is. That man was very clean, handsome and very well dressed. He spoke perfect English and smelled like million-dollar cologne. He had a wonderful white linen shirt on, beautiful tan, linen pants and the most expensive sandals I have ever seen. His hair was well clipped and he smelled great! Now what is your problem people!!!
They all looked at her in amazement and replied, "What is your problem, Amy? He was horrible!"
When Amy told her mother about this incident, they both quickly realized that an angel had visited Cracker Barrel that day! Everyone else saw him as they wanted to see him, but Amy saw him as God wanted her to see him. This young woman's experience is proof positive that we must all take special note of these words:
"Do not forget to entertain strangers. For it might well be an angel in disguise."

Join in and write your own page! It's easy to do. How? Simply click here to return to Angels.