I’m Looking Through You Growing Up Haunted: A Memoir 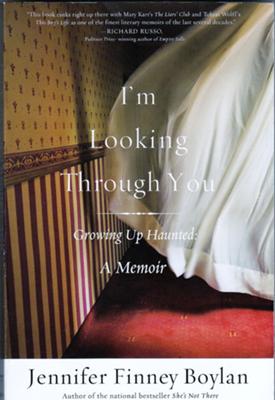 After reading the first few chapters of I’m Looking Through You by Jennifer Finney Boylan, I thought I was going to learn about this woman’s experiences with ghosts in her family’s old Victorian mansion when she was a child. However, this book proved to be much more.
At the same time 13-year-old Jim was capturing glimpses of ghosts in the dark, three-story home called the Coffin House, he was also beginning to see that he was not the person reflected in the mirror. Not only did he conceal the fact that a particularly dark spirit shared the third floor with him, but he also kept hidden that what he really wanted to be was a girl.
“I see the girls walk by dressed in their summer clothes. I have to turn my head until my darkness goes,” the author wrote.
You may be wondering how this collapsing old house got its unusual name. It seems a scientist had lived there and working a laboratory in the basement – the place where a blue mist could be seen upon occasion. When first laying eyes on it, Jim’s sister, Lydia said, “It’s like the Munsters’ house.”
It is most interesting how the author weaves this ghost story with her own self-realization that he/she was transsexual.
“Back then I knew very little for certain about whatever it was that afflicted me, but I did know this much: that in order to survive, I’d have to become something like a ghost myself, and keep the nature of my true self hidden.”
And like the ghosts who usually made their appearance during the dark of night, Jim would close his bedroom door when darkness fell, put on makeup and dress in girl’s clothes. While family and friends, if they’d know back then would have viewed his behavior as totally bizarre, Jim (now Jennifer) is able to look back on it now with a sense of wonder, as well as delightful humor.
For example, he related what happened on the evening of Lydia’s wedding. When the family returned from the reception, he saw her dress hanging in the hallway and could not resist the urge to grab it, take it to his bedroom and put it on. Then he heard the sound of footsteps in the attic. Of course, no one (of this world) was up there. When he released the trap door and went up to investigate, his father came up the stairs calling for him. Seeing the trapdoor open, his father climbed up and stood within inches of the hiding boy. He then left the attic and closed the trap door behind him leaving Jim trapped in the darkness. Worried that he might be forever enclosed in that attic tomb, Jim inched his way quietly toward the trapdoor.
“All at once the trapdoor gave way beneath me,” he wrote. “Briefly, I flew through the air; a streak of white, an inverted angel in a downward flight, like a character out of Paradise Lost. Then I landed in the middle of the third-floor hallways with a tremendous crash.”
Jim heard his father ask, “Jim, is that you?” Immediately he raced back to his bedroom, tore off the wedding gown, and stuffed the makeup and clothes into the secret panel where he hid those types of things.
Of course, life was certainly not all fun and games for Jim when he was young and he dared not tell anyone about his inner most feelings for fear of ridicule.
“I do not believe in ghosts, although I have seen them with my own eyes. This isn’t so strange, really. A lot of people feel the same way about transsexuals,” she wrote. “…Maybe some day, researchers will tell us more about what makes people see things that aren’t there or yearn to inhabit a body other than the one into which they were born.”

Jennifer Finney Boylan is author of 10 books, including The Planets, Getting In, She’s Not There: A Life in Two Genders and a short story collection entitled Remind Me to Murder You Later. She has been on a number of shows including Larry King Live, CBS News’ 48 Hours, Today and The Oprah Winfrey Show. For more information on this author, you can visit her site at: http://www.JenniferBoylan.net.