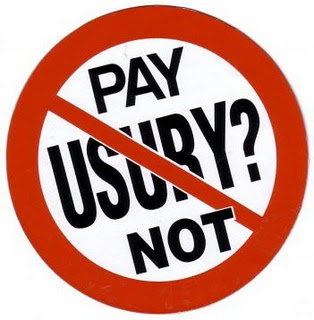 Note: Please pass this letter on to any "religious clergy" of any denomination. I have been sending letters to "religious clergy" ever since I learned about the design flaw of "usury" and how it is the killer machine that keeps debtors in bondage and servitude for generation after generation. Religious clergy either ignore my letters OR they respond with a "form letter" that avoids the issue of "usury."

In the times of the early Church, any usury on debt was considered a violation of God?s Law. Does the doctrine preached or the dogma followed by your Ministry on this particular issue harmonize with Scripture? If necessary, will you revise your doctrine/dogma to be true to the Word of God and begin teaching the ?truth? about the design flaw of usury that causes "positive feedback" on our orthodox system of usury-based, debt money?

I draw your attention to the following sound doctrine which proves beyond a doubt that usury on debt is a violation of God?s Law.

1. "If he beget a son that is a robber, a shedder of blood, and that doeth the like to any one of these things, and that doeth not any of those duties, but even hath eaten upon the mountains, and defiled his neighbour?s wife, hath oppressed the poor and needy, hath spoiled by violence, hath not restored the pledge, and hath lifted up his eyes to the idols, hath committed abomination, hath given forth upon usury, and hath taken increase. Shall he then live? He shall not live. He hath done all these abominations; he shall surely die; his blood shall be upon him." (Ezekiel 18:10-13) King James Bible

3. "Unto thy brother thou shalt not lend upon usury: that the Lord thy God may bless thee." (Deuteronomy 23:20)

Since the Bible has scores of passages of sound doctrine which condemns the charging of usury on debt, I have long been intrigued that neither the mainline religious organizations nor the T.V. Evangelical ministries are preaching that 'usury' on debt is a violation of God's Law. I believe that sound teaching on the issue of usury-based, debt money which is plundering the common people in every continent of this world must become the priority mission for all ministries as we progress into this 21st Century.

It has become increasingly clear in recent years that there is an intricate, international network of money-plunders more politely known as money-lenders. Unless the mainstream religious organizations warn and re-educate their congregations about the design flaw of usury and how they can release themselves from this wicked group of money-thieves, one can only conclude that mainstream religion will continue its steady state of decline.

That decline may very well be attributed to the fact that the majority of traditional clergy are neither exposing nor opposing the evils of our orthodox economic system which functions with usury-based, debt money.

One can further speculate that selected leaders within the heirarchy of the various mainstream religious organizations (Catholic, Protestant and/or otherwise) are in cahoots with these wicked and greedy money-plunders. I grant that indeed, some respected clergy members are preaching truth "as far as they know it" nevertheless, we must find more teaching clergy who are "led of the Lord" and are therefore, ready and willing to learn what the hallowed halls of formal religious training neglects to teach.

Armed with the truth about our orthodox, usury-based debt money system, these re-educated clergy will be willing to condemn the robbery of the poor, the working class, the agricultural community, and even the middle class by these wicked and greedy money plunderers.

The Family Life Foundation http://www.flfcanada.com a unique family-oriented, organization created in 1974 by an innovative group of pioneering, usuryfree creatives is now networking co-operatively with the UsuryFree Network http://www.cyberclass.net/usuryfree.htm and the UsuryFree Eye Opener http://usuryfree.blogspot.com to offer citizens simple strategies that can lead to the reality experience of usuryfree living.

Which Evangelical Ministers and/or Protestant Pastors and/or Catholic Clergy and/or otherwise will join usuryfree creatives and dare to teach the truth about the design flaw of 'usury' and how it creates unnecessary debt growth for individuals and all levels of government?

Citizens who participate as usuryfree creatives are encouraged to donate a portion of their tithing (up to 10%) to those ministries which dare to teach the truth about ?usury.? Furthermore, the usuryfree creatives have initiated unique fundraising concepts involving usuryfree community currencies which can be adapted and used by any religious organization.

Assuming that your ministry has been leading the way and has not been tarnished by the 'holy wars' of the 1990's, I challenge you to move ahead of the crowd by affirming that you will teach sound doctrine in light of what you have learned (or will learn) about how usuryfree, community currencies created by local citizens can effectively share the abundance that God has created.

When you understand and begin to preach the "evils of usury-based economics" and the "goodness of usuryfree economics," the real miracle will be that the people will immediately rebuke 'usury' and start to share their surplus with their family, friends, neighbours, working colleagues etc. as this current economic crisis deepens to a Depression. This type of miracle will be multiplied and duplicated at an exponential rate.

I believe that the people are ready to learn the truth about the design flaw of 'usury' and the perfected model of 'usuryfree' banking as established and promoted by usuryfree creatives not only during UsuryFree Week from November 13th to 19th every year, but also throughout the entire year.

I also believe the shakedown of the evangelical ministries during the 1980's and 1990's was a timely event as was the shakedown of the mainstream ministries over the issues of sexual molestation of children by clergy. As these events were happening, the research was being done and the lessons about usuryfree community currencies were being prepared by the usuryfree creatives who have become the visionaries for the possibility of usuryfree living for everyone on this planet in the not-too-distant-future.

Now, at this critical time in the evolution of usuryfree living, teaching clergy (pastors/ministers) of the gospel are needed. Will you dare to lead the way, and teach the truth about 'usury' and therein reap the benefits as your congregation breaks out from under the bondage of the bankers?

There are many links to other articles and other websites which expose the problem of usury and recommend the solution of usuryfree community currencies if you type in "usuryfree" at any search engine.

You are also invited to review the re-educational film documentary titled 'Money: Who Creates It, Who Controls It?' As we entered this 21st Century, Isaac Isitan, a professional film maker from Montreal, Quebec travelled to Turkey, Argentina and to Ithaca, New York as he researched the problem of 'usury-based' currency and the solution of 'usuryfree' community currency. The video/DVD is 65 minutes and after people view it they say: "What they are doing in Argentina and in Ithaca, New York we can do right here in our local community."

In 2006, Paul Grignon, an artist from Gabriola Island, British Columbia released another marvellous re-educational DVD titled 'Money As Debt.' This 45 minute, video/DVD uses caricatures to explain how our orthodox system of usury-based debt money functions. After people view 'Money As Debt' they ask: "Why didn't we learn about money creation in our years of formal education?" Recently, Paul Grignon released "Money As Debt II" and copies can be ordered from the UsuryFree Network.

Clergy who have already reviewed either or both of these videos are invited to organize showings for their respective local congregations.

NOTE: There is a biography of my work and mission as a usuryfree creative at this URL:
http://www.cyberclass.net/intro.htm

NOTE: Invite "religious clergy" everywhere to get their congregations to participate in activities to celebrate the forthcoming "Fifth Annual UsuryFree Week" scheduled from November 13th to 19th, 2009. Details about that at these urls:

Join in and write your own page! It's easy to do. How? Simply click here to return to Financial.