Living with 9 ghosts is utter chaos for Dan 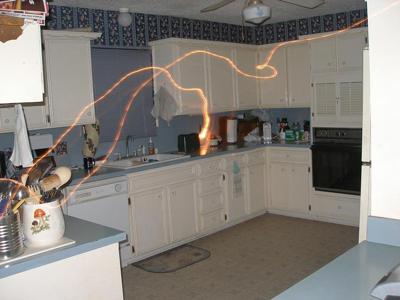 Orbs, strange lights, plasma and other indicators of spirit presence have been captured on film in Dan's home.

But there were more surprised to come.
As we turned to go back into the home, I saw the vertical blinds in his front window next to the door part, as if someone were looking out. I turned (and saw that) the others had seen it to. I said that it was probably the cat, but as we watched, my words had no sooner left my mouth and the other complete opposite side of that wide window - the blind pulled back just as though a pair of hands were holding the blinds on each side of the window open just enough to see it... and what was even freakier... the area behind that window was intensely black - so black that it blotted out the hall lamp at the door for quite a few seconds. Then, as we took a couple of pictures and headed for the door, both sides dropped and we could see the light of the lamp again! Whatever had been there was gone.”
TEXPART members thoroughly investigated both the swing and the curtains to rule out any pranks or tricks.
“I determined that there was nothing to make that swing do what it did, and even if the cat had jumped in the window and parted the blinds on one side, how in the world would it have reached clear to the other side and perfectly parted the blinds on the opposite side from where it sat? It just wasn't a big enough cat for even its tail to be blamed. And a tail would not have had that effect. What about the mysterious blackout?