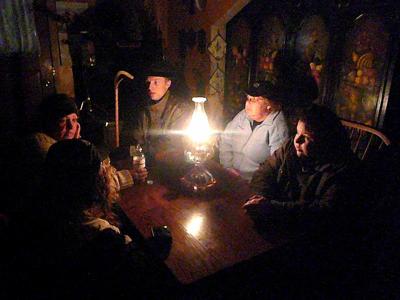 The CHAPS team has also investigated claims of paranormal activity at the Six Nations Reserve in Oshweken en.wikipedia.org/wiki/Ohsweken,_Ontario near Hamilton, Ontario. They were recently invited out to the site to investigate claims of strange lights and odd footprints that were found.

The reserve includes many acres of woodland, marshes and horse paddocks, as well as private homes. The area chosen for the investigation included a small residence in the immediate area. According to the team’s report, they experienced “the phenomena of witch lights…” like those experienced by folks in a Pennsylvania forest.

These eerie flickering lights are seen around the world and have been reported for centuries. Some folks believe they are the work of fairies, witches or even Roman soldiers carrying torches. Whatever they really are, they certainly captured the imagination of the CHAPS team as they stood in the darkness.

“Add this to increased EMF (electro-magnetic field) readings in the forest, that was a point of interest. Such readings can often be explained away due to other sources of electrical energy, such as wiring in a home.

As well, David said: “Many times when noise or sound was requested, we were met by very large breaking branches, again an experience you had to be there for,” that rattled their usually calm nerves.

A number of photos taken that night showed orbs and video footage captured “some excellent light anomalies that were not common to insect flight.”

However, most convincing for Dave were the “abnormal fears” experienced by team members.

“Bill Flegg an experienced outdoorsman was spooked enough to depart his location quickly,” he noted. “Sandy, our camera person, forced herself out of a location due to abnormal noises uncomfortably close to her. There was not one member that was not littered with contact.”

It became obvious to CHAPS members that something strange was happening in the woods of the Six Nations Reserve and they plan to return to the site again.

“Unfortunately with the space too large to cover, we have been invited to re-attend in the spring with a our crew for a few days of investigation.”

As a team, they hope to bring the passion back to paranormal science by capturing proof of life beyond the grave. However, they don’t enter into investigations with closed eyes and minds.

“We use a proud mix of science, with a full compliment of equipment and a strong emphasis on the spiritual. We do not go in with the mindset to prove inactivity or activity. We simply go in to enjoy the investigation and learn as much as we possibly can about the unknown.”

David said the team is looking forward to its upcoming investigations and “a plethora of residential work” at the infamous Waverly Hills Sanitorium in Kentucky.